Whoever makes the first move to edit, should get the first chance to initiate. It doesn’t matter how awesome your idea is. If they were a half second ahead of you, let them start an activity first and let them say the first line. 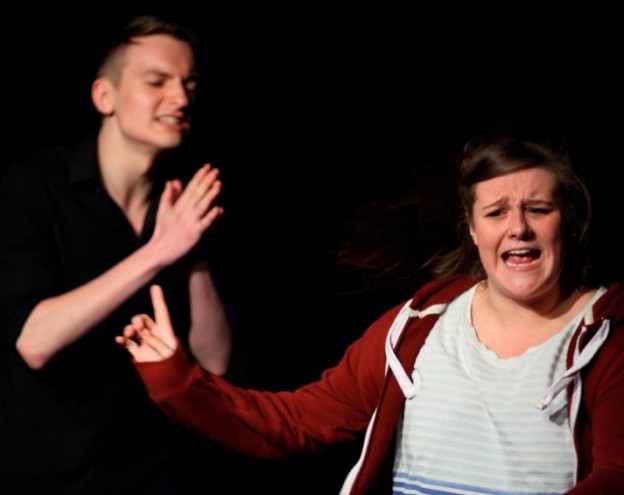 Perhaps one of these have happened to you in an improv show.

It’s time to edit a scene. One player makes a sweep edit, and everyone else hesitates before joining. Finally someone joins, but the first player doesn’t see them, and waves for someone else to join the scene too. Now there are three people in the scene. They each make fumbled initiations, and the scene stumbles forward as they try to make it work.

Or perhaps you’ve done this. You walk on stage and start doing an activity. You say nothing. No one joins for a really long time, perhaps because they can’t make sense of what you’re doing. Finally someone does come on stage and immediately says something that contradicts what you have created. You freeze because you’re not sure if you should drop your initiation or clarify what you’re doing.

Maybe you have done this. Two people edit at virtually the same time, they go on stage, look at each other with a blank stare, because neither of them have an initiation. Instead of taking a breath and making a simple choice, someone panics and makes an outlandish initiations that the other one can’t make sense of.

Things like this happen when you haven’t agreed upon basic etiquette for starting improv scenes. Here are some suggestions.

Let the person who edits first, initiate first
Whoever makes the first move to edit, should get the first chance to initiate. It doesn’t matter how awesome your idea is. If they were a half second ahead of you, let them start an activity first and let them say the first line. If they do nothing, go ahead and make your initiation, but they have dibs. If it takes a moment for them to grab a chair, don’t initiate something else while they are setting the stage.
Join the person who edits before you know what they are doing
Just go out there. You don’t need to know what they’re doing. Just join, let them initiate and respond.
Don’t bring people on with you to start a new scene
First, you shouldn’t be picking your scene partners. You should be fine with whomever joins you. Also, if your team is following the previous guideline, you shouldn’t need to nudge someone to join. Someone should already be out there with you. But if no one joins you right away, just start your activity and be in the space by yourself. Pretend that is exactly what you intended to happen. Don’t treat it like a mistake. Maybe say a line or two that this character might say if they were alone.

There is an exception to this. If you want to initiate a scene which requires a character from a previous scene, you may want to signal to the person who played that character. Come up with a signal for your team if you don’t have one already. If possible use something subtle that most audience members won’t notice. I personally like making eye contact with your teammate if they are across the stage, or nudging them subtly if they are next to you before editing.

Don’t ever show disappointment because the ‘wrong’ person joined you or they ‘didn’t understand’ your initiation
This sucks so hard when I see it. I don’t care how ‘terrible’ you think their move is or how ‘bad’ you think they are. Your job is to make them look great. If you do otherwise, you look like an asshole and the audience will dislike you for it.
You never have nothing
Sometimes you edit because it’s the right time to edit. You don’t have an idea. Someone joins, but they don’t have an initiation either. Don’t panic. Take a breath. Look at the other person. Make an observation about the other person. It can be how you think they feel or how they appear to be behaving. Don’t force things. Just talk about how the scene feels and let the circumstances tumble out when they want to. Make little decisions about where you are and what’s going on as they come to you. It will be fine. Really.
If someone sets a chair for you, sit in it
I mean this literally. Sit in the damn chair. Their initiation might not make sense if you make a different choice. It’s amazing how often I see someone set a chair and their scene partner ignore it.
You don’t have to talk about what you are doing
Maybe the first couple of lines are about the situation or activity or place, but the scene doesn’t have to be about that. You can talk about anything. See “Opening lines: don’t make too much of them” for more thoughts on this.

These aren’t necessarily the right guidelines to start scenes. Your team may have different preferences or your form might require different ways of starting. But you should have some guidelines. Advanced players often don’t need this. But beginning and intermediate players usually do need something like this. So have your coach give you some guidelines and stick to them.

3 thoughts on “Etiquette for starting an improv scene”