Second Life, the 3D virtual world in which I make my real life living, is offline today. For the last week or so, things have been bad. Linden Labs has made a number of “upgrades” in recent weeks to both their servers and their viewer (or client). It has not gone well.

When things start going badly, I start hearing from customers that they have lost their stuff. The things you own in Second Life, things you have bought, made or been given, only exist on the Second Life asset servers. You can’t back them up directly to your hard drive. Often you only have a single copy which you cannot even back up in Second Life. So when someone loses something it can be very upsetting. This week I’ve heard from a lot of upset people. It hasn’t been this bad in a long time.

Also, people have cut back on shopping. The week before was nearly a record week for me. This week, my business was cut in half. I don’t know if I’ve ever personally seen a week when my SL income dropped by more than 50% until now. 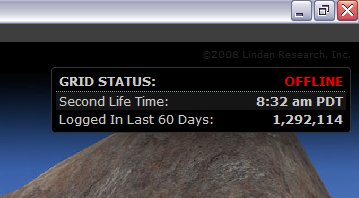 And then last night when I got home, eager to log in and catch up with my customer service requests, I couldn’t log in. Second Life was officially offline and had been for hours. I went to bed, woke up this morning, and tried to log in again. It appeared that it might be working again, but again I was unable to log in and soon after the same offline message appeared in the top left corner. This could be the beginning of a very serious outage.

This is the scary part of making Second Life your primary income, the knowledge that SL’s infrastructure can crumble at any moment. I suppose this is true with many types of businesses, but Second Life as a platform often still feels like it’s in beta.