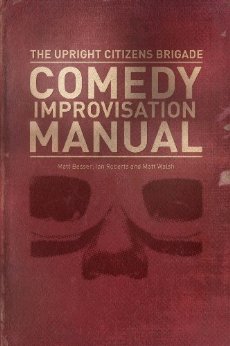 Many of the terms in the book have appeared elsewhere and are probably familiar to most improvisors. For instance, many people have their own personal take on what game of the scene means. Often these explanations seek to simplify the definition in an attempt to demystify the term. This book elaborates on the term, defining game in a quite specific way and then laying out a detailed plan on how to get there.

Some terms are new to me though, for instance, the term framing. For many years, if someone in a scene does or says something unusual for the circumstances, I’ve encouraged their scene partner to pick at that, to question it, to treat it as strange, to be skeptical of it. I didn’t have a single term for this and now I do. In this book, the UCB uses the term framing to describe this.

Framing means letting your scene partner know that you feel that they have said or done something unusual within the context of the base reality. When you frame, you highlight or underline the unusual so that it stands out to your scene partner.
page 72

This is incredibly useful because sometimes your scene partner doesn’t realize that they have said or done something unusual. Also, when you frame something as unusual, you are saying, “I agree that what you did is the first unusual thing in the scene. Let’s use that to build the game.”

One terrific point they make is that because of framing, ‘finding the game’ is always about listening:

New improvisers often fail to listen because they are searching so desperately for the Game of the scene in their own head. You shouldn’t have to search hard for the Game because it lies in your scene partner. Either your scene partner will provide the unusual thing or frame what you have said, thereby identifying it as unusual.
page 81 (emphasis mine)

I’m sure going forward, not only will I use the term ‘framing’ to describe this, I will likely be able to explain it more clearly and succinctly because of the book. It will also be wonderful to simply refer students to chapter 4 if they have more questions.

Honestly, when I got this book, I expected to find it useful, but it’s easily exceeding my expectations and I’m not even halfway done. They lay their ideas out very clearly, using lots of examples and little graphics. It’s a patient book, one that improvisors at every level, even complete beginners, will find useful. It’s also going to take a lot of time to digest. At nearly 400 pages, it’s much heftier than many of the other popular books on improv. As far as I can tell, there is no fluff in the book either. It doesn’t waste time telling stories or arguing why their way is best. They don’t bother to argue, “This is the right way to improvise.” Instead the point of view seems like, “This is how we improvise, and how we teach other people to improvise, and we think it works quite well.”