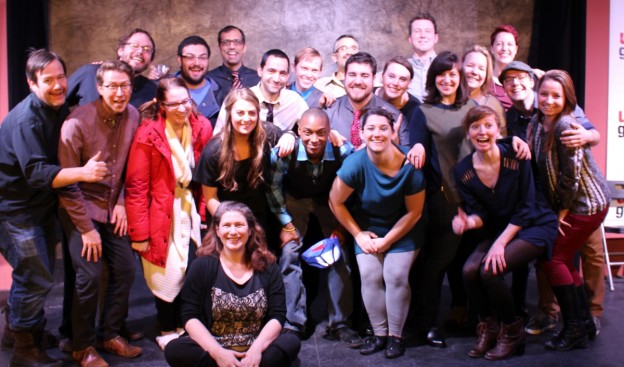 I also think that the basic premise at the heart of them is wrong. Team centric systems are based on the idea that a person, or committee of people, can not only identify talent in others, but can put together small teams of performers that will have good chemistry and excel together. Identifying skilled players isn’t too hard, but putting them together into cohesive teams is very difficult.

Looking back on my experience at iO and UCB, there were very few great teams put together in this fashion. Most of the great teams put themselves together. A group of friends within the theater got together and formed their own team. I was lucky enough to get put on one of the exceptions at iO. My first team was Frank Booth, a team that had been slowly assembled over 6-9 months. One more person was added after me and for the next 4 years, nobody else was. Over time we lost 2 of the original 10 players. We became a house team and for a while was ‘the team’, closing the Saturday night show each week. So that experience made me think teams were the way to go.

However, most of the people who started around the time I did had a very different experience. They were bounced from team to team, often for reasons that weren’t obvious or transparent. For many if not most people, their experience at iO ended with being cut, an experience that was often not handled well and led to bitter feelings.

At UCB, many of the policies that we put in place, were designed to improve the system. We held auditions instead of plucking people out of classes. We kept the number of teams low and the quality of performers high. Whenever there was a change, we made personal phone calls, rather than simply publishing a schedule. We made a commitment to let teams have time to gel. We tried not to mess with them until they had plenty of time to figure out how to play with each ohter. But still, I don’t know that our track record was much better. There seemed to be less bitterness, but we didn’t create many great teams. Most of the best teams seemed to form themselves, breaking up teams that we had put together originally.

This nagged at me for a long time. I knew I wanted to run a comedy theater again at some point, but I hated the idea that it would be another team based system. One of my least favorite things was breaking up a team and cutting someone from the theater. There had to be a better way. And then I talked to my old friend Lillie Frances. We had been teammates on Frank Booth. Several years after leaving iO, Lillie bought a theater in the suburbs and instead of having teams perform, she cast an ensemble.

She usually has between 20 and 30 performers in her ensemble and she rotates them through the main show. Everyone performs 1-2 nights per month, in different combinations. Her theater was short form, but I didn’t see why it couldn’t work for long form as well. When we started planning, we borrowed liberally from Lillie’s model. We would cast an ensemble, invite everyone in the ensemble to participate in the shows as long as they could rehearse, and then rotate people through the cast.

There are many advantages to this kind of system. If players want to be more involved, they can come to more rehearsals and do more shows. If someone gets too busy, they can reduce their commitment and still be a part of the ensemble. While runs of shows must come to an end, and in a few cases people have moved on, we haven’t had to cut anyone. If someone isn’t up to speed or needs to work on their skills, we help them, we don’t cut them. Perhaps someday we will have to nudge some performers to move on, but I’m expecting that to be a very rare occasion.

Running a theater like this, where we invite people to be ensemble members and give them the autonomy to be as involved as they want without any real fear of being cut has been incredible for morale so far. Our ensemble members seem very happy and loyal. And as they have gotten to know each other, chemistry has steadily improved.

We are about to have auditions for the ensemble. We hope to add about a dozen new members and I’m eager to see how the new blood fits in with the current ensemble. We have nearly 400 people signed up for the auditions. It’s going to be a lot harder to get in this year than last, but it’s really worth it. It’s the kind of experience I wish I had had 25 years ago when I started in Chicago.