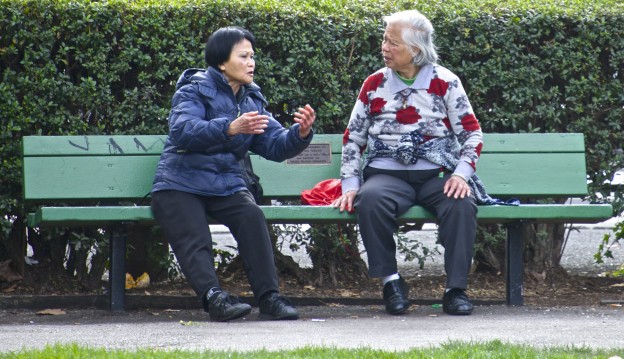 In this instance, Brad is taking on a point of view that many people share, that he loves dogs. But he takes it to an absured extreme.

It’s a good choice for Jennifer to be the voice of reason and object to his statement. She could say something like, “That’s just ridiculous!” but by being more specific about what she objects to, she helps Brad much more. Brad can double down on the part that Jennifer objects to and provide a rational of why he prefers homicidal dogs to kind people.

When I started using sympathetic disagreement in my classes and coaching sessions, I realized that sympathetic disagreement was one tool among many basic tools that you can use to help shape your scene partner’s point of view. Think of a spectrum of tactics or responses to a given point of view. At one end, your character might completely agree with your scene partner’s point of view. On the other end, you might vociferously disagree by ranting and raging against your scene partner. When improvisors disagree on stage, they often argue far too much in a scene and often their arguments are more toward the vociferous end of the spectrum. I’m more interested in the range of tools which fall between polite objections and agreement, and I put all these tools in the category of Sympathetic Engagement.

For instance, I’d break sympathetic disagreement into two tools in this category:

But here are some others:

Here is an example of each tool. First, agree with the specifics:

Brad
I love dogs so much. I’d rather live with the meanest dog than with the kindest person.
Jennifer
Yep, even the most aggressive dog would be a better roommate than the nicest person.

This is close to simply saying “yes” and it’s less than “yes and” since Jennifer isn’t really adding anything. She is highlighting what is strange about Brad’s statement by specifically agreeing with it.

Next, an example of expand and inflate:

Brad
I love dogs so much. I’d rather live with the meanest dog than with the kindest person.
Jennifer
So true, a snarly, nasty dog is better company than a nice person who might do nice things for you.

Again, this isn’t quite the same as yes anding. In fact, I often prefer expanding and inflating to yes anding. This tool is quite useful when what your scene partner said is a little strange, but not something worth objecting to. By expanding 10% you can push the point of view more clearly into strange and absurd territory where it can be more useful as the seed of a game. Please note that Jennifer is saying this sincerely. If she were to say it sarcastically, it would be another tool.

Also you can repeat and rephrase:

Brad
I love dogs so much. I’d rather live with the meanest dog than with the kindest person.
Jennifer
So, you think even a dog with an aggressive personality is better than a person who treats you well.

Note that when you use this technique, you have no obligation to agree with it. Your tone can be a bit more pointed and skeptical, allowing you to object later when Brad specifies what he means. This type of response invites him to be more specific.

And finally, you can try curious questions:

Brad
I love dogs so much. I’d rather live with the meanest dog than with the kindest person.
Jennifer
Have you ever actually met a really mean dog? They can be quite scary to be around.

Questions allow you to focus in on the detail that you might find most troubling or interesting. Again it invites your scene partner to double down on his point of view, making it more specific and absurd.

Each of these tools are useful. They can be practiced individually. I like to isolate each technique and drill them as a way to warm up before scenes. Which one you choose to use is somewhat dependent on what your scene partner just said. If your scene partner isn’t saying anything particularly objectionable or illogical, you should probably not politely object. Instead, just agree with them, or agree and expand on their point of view. Save polite objections for when they cross over into truly strange territory.