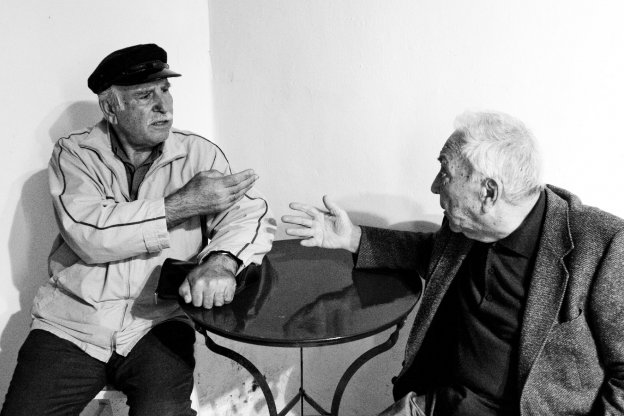 In your first few improv classes you often get very broad guidelines of how to create good improv scenes. For instance, you are taught things like “Always yes-and your scene partner!” or “Never ask questions!” or “Don’t try to be funny!” These rules are often useful, but improvisors tend to hold on to them too long. They judge their scene work against these rules when the rules don’t apply. And these rules get in the way of learning new things.

For instance when I teach people how to discover games in their scenes, I encourage them to ask questions and to disagree with the other character. We talk openly about trying to make the scene more funny, and this frustrates some improvisors. Sometimes it frustrates them so much that they reject the concept of the Game of the Scene altogether, and that is a shame.

Why do we tell students to avoid questions? Sometimes there are students who do nothing but ask questions, and more importantly they ask questions like, “Who are you?” or “What are you doing?” or “Why are we here?” Instead of establishing the basic information of the scene or making choices, they stand there paralyzed and ask their scene partner to do all the work for them. If they are just starting out, it’s easy to just say to them, “Don’t ask questions.” And leave it at that.

But questions can be useful in a scene. You can and should use questions when:

This leads us to…

Typically we steer new improvisors away from arguments. But that’s not because we want characters that are always in harmony. It’s because students want to argue about everything when they are starting out. There is this deep tendency for people to think that they need to find something to fight about in a scene, and they will argue about anything. They will argue about whether to have breakfast or not, what is the best professional sport, or what is the best color for a sports car. They will argue about the first thing that comes up in a scene and once they begin that argument, they will become locked into it, spending the rest of the scene arguing back and forth. Once again, it’s easier to just say, “stop arguing” and be done with it.

But arguments can have an important place in a scene and when your scene partner does or says something that your character wouldn’t like or would disagree with, it’s imperative that you express this. That can sometimes lead to an argument. And that’s perfectly fine. The only danger is that you get stuck in that argument for the whole scene without discovering anything new.

Disagreements are opportunities for characters to clarify a point of view. And they are usually necessary when someone is trying to satirize an objectionable point of view. If I wanted to satirize my sexist boss by playing a misogynist character, I genuinely hope that someone on the stage challenges my point of view. If everyone just goes along with or even worse, ignores my sexist dialog or actions, it just makes us all look like we are jerks. But an honest and reasoned rebuttal to my point of view can turn an ugly character into a funny satirical scene.

Which brings me to…

Trying to Be Funny

Anyone who has taught a level one class has probably given someone this note. “Stop trying to be funny!” I often would tell people this in the first half hour of the first class before we’ve even done one scene. I don’t want students to use a goofy walk or a silly voice or to behave in a completely bizarre way in an effort to try to be funny. With few exceptions it’s tiring to watch.

What level one students often don’t realize is that by being honest and truthful and by behaving intelligently in their scenes they will be far more funny than by making ludicrous choices. That isn’t to say that we don’t want laughs. We do. We want the audience to enjoy themselves. We want them to find what we do funny. Personally, I would love for the audience to be so amused that they could barely breathe. I want to create moments on stage that not only make the audience laugh, but that when they think about the performance days or weeks later, it still makes them laugh, or at least smile.

There is nothing wrong with wanting to be funny. It’s just a matter of how you get there. I can certainly teach people lots of ways to improve their performance and usually this leads to scenes that crack us all up. But sometimes when you start to analyze very specifically why a moment made us laugh and then try to translate it into a game that we can continue to play and explore, it rubs some people the wrong way. They think I’m encouraging them to be jokey and their inner improv level one student is offended. I’m violating some sacred oath they took to not be funny and it bothers them. Again, that’s a shame. It sometimes gets in the way of them learning a powerful new tool to make their improv better and more fun.

If you find yourself in a class where the teacher is asking you to do something that violates what a previous teacher has told you, you should relish the moment. It means you might learn something new and very useful. Sure, it might be bad advice, but I’d encourage you to turn off your inner improv student and embrace the ideas and exercises that are being presented. After the class is over and after you have wrestled with the new ideas for a while, if you still think the teacher was wrong, discard it. But you might realize that instead of having two competing ideas that are irreconcilable, you have have two complimentary tools to use in different situations.

Kevin Mullaney is the Artistic Director of Under The Gun Theater and the Chicago Improv Festival. He will be teaching a class in Game of the Scene starting at the end of May.