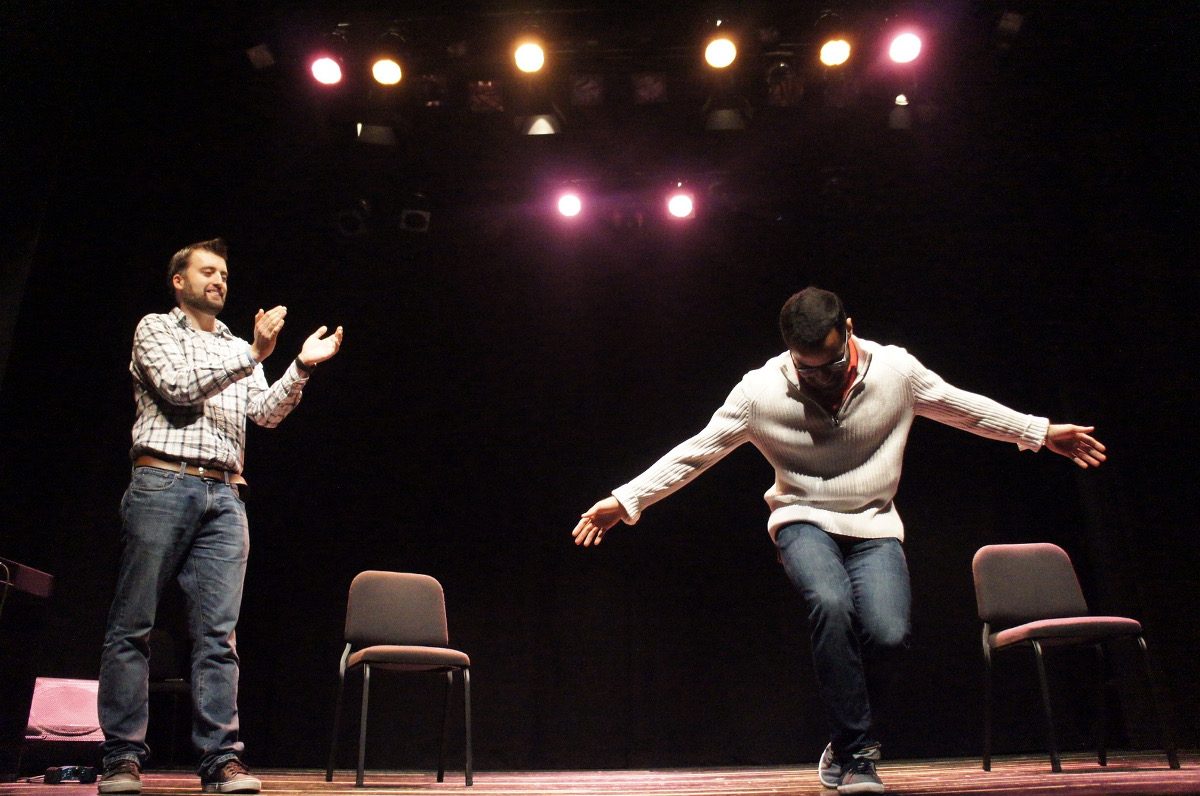 This year I attended the Improv Fest Ireland and one of the shows that got me thinking was Neil+1. In it Neil Curran finds an audience member who has never improvised before, preferably someone who has never even seen improv, and makes them his scene partner for a 45 minute show. It’s a daring concept, improvising with a complete newbie in front of large festival audience. And yet it works.

I’ve seen demonstrations like this a couple times before, taking someone from the audience and creating a scene or a show with them on the spot. Maybe I’ve been lucky, but it always seems to work. In part, it may work because the audience lowers their expectation of what the newbie can do, so any good move by them is treated as particularly surprising, but I think something else is going on. I think it tends to work because the experienced player takes on the full responsibility of making the scene work and making their scene partner look good.

Often when I see students start scenes, they don’t take responsibility for the scene. They make half of an initiation or none at all. They pick an activity, but it’s a general one. They wait for their scene partner to make a move, because it seems impolite to establish too much up top. They hint at their circumstances instead of making decisive moves. And I think that is often a mistake.

So I encourage people to make clear, confident moves at the top to establish the who, what, and where of a scene. And in Neil+1, that’s exactly what Neil does, he takes full responsibility to create the circumstances of the scene. Of course he treats whatever the newbie says or does as a gift and uses it thoroughly, but he doesn’t wait for them to make a move.

Taking responsibility and performing with a newbie: an exercise

With that in mind I started asking students to try this exercise. Two people up, assign one of them to be the newbie and one to be the veteran. The person assigned to be the newbie should just say yes to the scene. They shouldn’t make bold choices, but they should agree to whatever the veteran wants to do. They should go along with whatever the vet sets up. The veteran player should take full responsibility for initiating the scene, setting up the base reality and gifting their scene partner. Once the scene gets going, the roles can fall away and both performers can play equally. Ideally students should get multiple chances to try both roles.

One note, the newbie shouldn’t try to play badly or create chaos for the scene. Nor should the veteran use it as an excuse to pimp the newbie. This is a role play in which you are performing in front of an audience of 100 people, many of them are your peers who will call you out if you don’t treat your newbie as anything less than a poet and a genius. Make them look good at all cost.

I’ve noticed that for most people, this exercise feels pretty good on both ends. It feels somewhat easier to simply take the lead as the veteran performer instead of negotiating every initiation. And for the person playing the newbie, it feels good to just yes instead of yes anding. And I think both are good things to know.

When I enter a scene, if I feel like my scene partner has a specific idea, I do my best to fit into their plan. I wait a few lines to give them room to initiate before I start adding things. I just yes them. Conversely, when I initiate, I do my best to get my idea out in a way that is clear, succinct and still sounds like natural dialog. This exercise gives you a way to practice both.

BIG IF 4 – Neil +1 from Barcelona Improv Group on Vimeo.

Would you like to study improv with Kevin Mullaney? Sign up for a SceneBlast dropin workshop or for the new Core Improv Program at the Improv Resource Center. All of these classes are listed at classes.improvresourcecenter.com.