For a base reality to be useful, we must be able to ask and answer the question, “What is weird or unusual for this base reality.” If it’s too weird to begin with, it may be hard to answer that question. 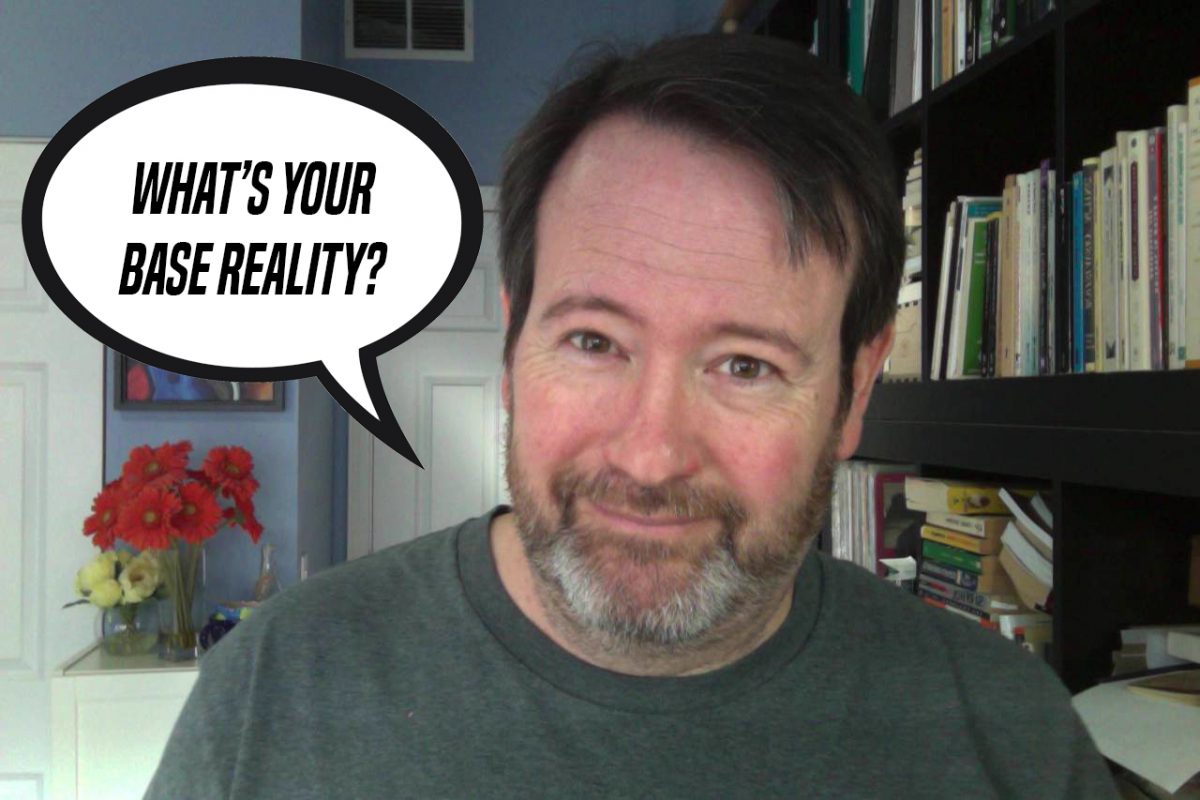 When I introduce the term base reality to my students, I often begin by saying that it’s similar to having a who, a what and a where. Often, this is how improv is taught to beginners. You use agreement and yes-anding to establish who you are, where you are, and what you’re doing.

As far as I know, the term base reality was coined by either the UCB or one of their teachers to describe what I have often called the situation. It’s more specific than just any old who, what and where, because they need to feel like they belong together. It may be a situation that you have experienced in real life. It may be one that you’ve only seen on TV, in a film or in a book. Perhaps it’s a situation that you’ve never encountered before. But whatever the case, the base reality probably shouldn’t be funny or weird or absurd. If it is, then it’s more than a base reality.

Let’s look at some examples. Let’s say your ‘where’ is a cruise ship. Your ‘who’ is a psychiatrist and a lion tamer. And your ‘what’ is that you are playing Russian roulette. In many improv classes, this would be a fine example of a who, what and where. But it’s not a base reality. It’s too weird to be a base reality.

For a base reality to be useful, we must be able to ask and answer the question, “What is weird or unusual for this base reality?” If it’s too weird to begin with, it may be hard to answer that question. The base reality is like the greens of the salad. It’s the bricks of the house, or the hull of the ship. It’s not the exciting part, but it’s the part we need to make sense of the scene.

A better example of a base reality would be a couple (who) celebrating their anniversary (what) at a tiki lounge on a cruise ship (where). This is a situation where the pieces fit together. It’s specific and interesting. But most important is that it’s familiar enough for us to ask the question, “What is weird, unusual or inappropriate for this situation?”

Beyond the Who, What and Where: Purpose and Procedure

After I became familiar with the term base reality, I spent a lot of time thinking about what makes a good base reality. And I realized that a who, what and where didn’t quite describe all the pieces that make a base reality useful. The kind of ‘what’ you establish matters. If you’re ‘what’ has purpose and a procedure, it’s much easier to answer the question, “What do we do now?” later in the scene.

For instance, take this base reality: two roommates, in their living room, hanging out. It’s not terrible. I’m sure I’ve seen at least one scene like this work… maybe. But the what has no purpose and there’s no implied procedure. Some tweaks to the what could help. For instance, maybe the roommates are pregaming before a Halloween party, or one of them is helping the other get ready for a date, or maybe they are cleaning up the morning after a big party. Now the characters have a purpose. It’s more than just an activity. And there is a procedure that’s easy to imagine. You can always ask the question, “What’s next?” and find an answer.

This will become much more important, once you have discovered and framed the game of the scene. Because if you have a purpose and procedure, whenever you are unsure of your next move, you can just do whatever you would do next in this situation. If there is no purpose or procedure. If you are just doing an activity or no activity at all, it’s easier to get stuck. And I don’t what you to get stuck. So make sure your scene’s ‘what’ is more than an empty activity.

If this post was helpful to you, please share it. If you have questions or comments, leave one below. And if you live in Chicago and would like to study the Game of the Scene with me, check out the link to the Core Improv Program at the Improv Resource Center.