It starts as a faint feeling of discomfort in my abdomen, a deep ache or tightness, and then begins to spread. At the outset, I’ve mistaken it for hunger, but as it progresses, the pain increases. It becomes very clear what is happening. My gallbladder is malfunctioning. The ducts from the gallbladder are blocked, and the pain will soon become quite unbearable.

The most common symptom of biliary sludge — when it causes symptoms — is pain in the abdomen often associated with nausea and vomiting. This occurs when the particles obstruct the ducts leading from the gallbladder to the intestine.

Now, it’s not the worst pain I’ve felt in my life. I can certainly imagine pains that are deeper and more acute. However, it’s a very frustrating pain. My first few attacks, I didn’t even know what it was. I thought it was food poisoning. The nausea that accompanied it made me feel like vomiting might help, but it never did.

I tried a variety of products to lessen the symptoms. Alka Seltzer seemed to be the only one that had any effect.

When I finally talked to a doctor about it, he suggested that a pain reliever like Advil might help. “Take a few Advil when you feel the pain coming on.” So that is what I do now. When that pain starts to come on, I take a few Advil and/or some Alka Seltzer and lie down. Surprisingly it does the trick.

Now these attacks are infrequent. I had several last fall, but I think I’ve only had two this year. The hypothesis that I’m currently working under is that starches in my diet aggravate it. The first few attacks I had were after large meals with lots of rice. I also noticed that the lignans that accompany flax seed oil also irritate it, as do ground flax seeds themselves (the oil without lignans seems to be fine).

END_OF_DOCUMENT_TOKEN_TO_BE_REPLACED

So far so good. I’ve made it through the first five full days on a low carb diet. Besides a small serving of berries and full fat yogurt each day, my diet has been meat, egg and cheese (usually with a serving or two of green leafy vegetables a day). My typical breakfast looks like this: 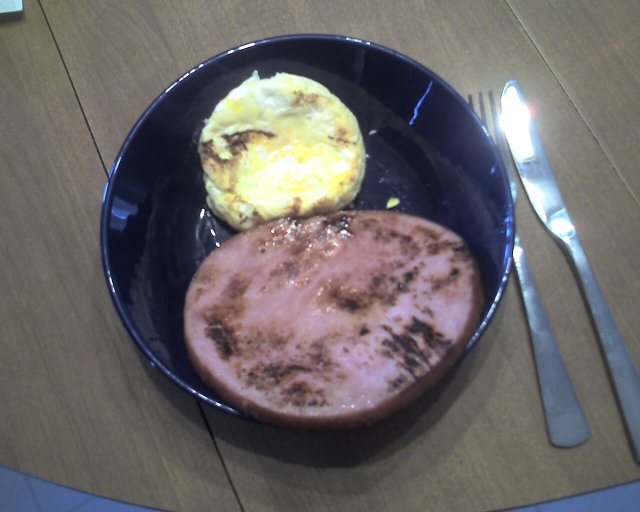 After five days, I’ve had no real weight loss. After a big meal, I’ve occasionally felt a bit overfull, which probably means I’m eating more than I need to. And on day two I had a small carb crash. But in general I’ve felt good. I haven’t felt very hungry. The food is relatively satisfying and the restrictions haven’t been hard to stay within. I miss the fruits and vegetables a bit, but I’m thinking that I’ll add a few servings of them back eventually.

END_OF_DOCUMENT_TOKEN_TO_BE_REPLACED

I’m surprised how long it has taken me to get through Good Calories, Bad Calories

by Gary Taubes. After 2 and half weeks, I’m still not done. I’m on the last chapter though. Maybe I’m just a slow reader.

The book is dense, bringing together a huge number of scientific studies that date back to the beginning of the the 20th century. His goal seems to be to overwhelm the reader with evidence that many of the assumptions about diet, obesity and disease are wrong. He isn’t content to give you one or two examples of studies that suggest that carbohydrates are the primary factor behind obesity, diabetes, heart disease, cancer and a range of other modern illnesses that were rare before the 20th century. He piles it on, determined to make sure that someone can’t read his book and dismiss it as “some fad diet book.” If you say he is wrong, you better bring your citations with you.

I’ve enjoyed the ride, but I wonder how many readers get bogged down and don’t finish it, or don’t care so much about the reams of evidence that Taubes has compiled and want to skip to his conclusions. One passage near the end that jumped out at me as something that people need to know:

END_OF_DOCUMENT_TOKEN_TO_BE_REPLACED

I’ve been reading a lot about diet and disease. The first book I bought for my Kindle

by Gary Taubes. It is a thick book and I’m only about half way through but it has been enlightening.

I am probably too easily swayed by these kinds of books, ones which set out to prove that conventional wisdom is dead wrong. Years ago, before the Oliver Stone movie, I read way too many books about the Kennedy assassination and was convinced that elements of the CIA were involved (something I still find credible). Later I read a book about how the primary hypothesis about AIDS may well be wrong, and was, for a time, convinced. So I know that I need to temper my enthusiasm for this book.